Briana’s Legacy: A Bounty of Gifts

Have you ever considered what will be left behind for those who love you, once you’re gone? I’m not sure if such thoughts crossed my daughter-in-law’s mind.  Briana was focused on plans for her future with her husband, my son Marc. None of us were aware she only had three short decades ‘to do it all.’

Saturday, October 27th, was the anniversary of Bri’s death, four years ago, a few weeks before her 32nd birthday. In those final 22 months, Bri and Marc lived with us, she touched so many aspects of our lives…leaving behind everyday reminders of her boundless enthusiasm. We have the usual mementos: photographs, books, cookware & kitchen gadgets, favorite songs, art, clothing and hand crocheted hats I’ve distributed to friends or kept to wear, and some personal nick-knacks…special items from her gratitude alter, jewelry, and the like.

In almost every room, the garden and driveway are reminders of Bri…

When our 1983 Volvo finally didn’t pass its smog test, Bri went test driving with Bill and helped us select a 2007 Prius, one of the best cars we’ve ever owned.

Window ledges and bathroom counters hold special shells Bri’s mom collected from Santa Barbara beaches. My flower vase collection includes a gorgeous blown-glass beauty I treasure, cracks and all, another one of Bri’s Mom’s sentimental items. A small lidded, red stone container from India sits on my kitchen window ledge to hold my rings when I do the dishes. It was Bri’s Mom’s. And Bri thought I might like it. When Marc moved to L.A last year, he left behind some handsome hand thrown pottery, that used to be theirs. Container plants Bri loved: a fig and rubber  plant, a scented rose geranium, and a Meyer lemon tree grow in our home and out in the garden.

But Bri left us a more unusual legacy:
~ This FigsWithBri blog with its inherent challenge to hone my writing skills and master of the art of food photography.

~ Though it wasn’t a widely-recognized problem when Bri was alive, my volunteer work with California’s Yes! on Prop 37 LabelGMOs grassroots movement feels like a tribute to Bri. She would have jumped into that issue BIG time, blogging about it passionately, I’m sure.

~ Bri made special friendships via food blogging. Some of whom have become our friends, too, now that Bri is gone: Bee & Jai; Shankari & Rajesh and their darling son, Ashwin; and Manisha Pandit and her family, whom I hope to meet in person someday.

Other friends from various parts of Bri’s multifaceted life enrich ours as well:
~ Her beloved college roommate, Corie, who was like the sister Bri never had. Along with Corie’s hubby, Andy, and their delightful kids: Charlie, Caroline, and Xander.

~ Feisty, generous spirited Kate, a Plant Spirit Medicine associate, very fine cook, and fun, irreverent friend with her husband Ken, and their darling t’ween daughter Lili Grace, whom we’ve had the pleasure of visiting twice in British Columbia, in late 2010 and again this past September.

~ And there are MANY other acquaintances and extended family members, whom we hear from occasionally or think of fondly when remembering Bri. Even favorite farm market vendors became friends with Bri.

She’s been on my mind often this year. Since May, we’ve had two family weddings and the wedding of Briana’s high school friend  Amber, who introduced her to Marc. Bri recognized very quickly that Marc was “her” guy. Bri would have enjoyed celebrating these wonderful weddings with us! 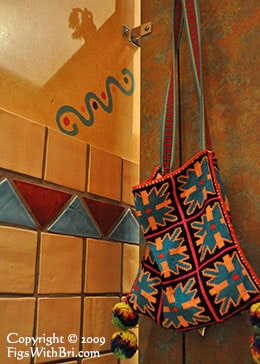 A favorite everyday ‘hand-me-down’ Bri left behind is a cheery handwoven purse made by the indigenous Huichol people of Mexico. I carry it everywhere. The playful bag  garners compliments almost weekly from women, men, kids, and the occasional dog…mistaking the round pom-poms for toy balls to play with!! Two weeks ago, Charlie commented on it, when we were at the Pumpkin patch…a little shadow briefly crossed his face, when I said it used to be Bri’s. One Saturday at the Santa Rosa farmers market a fellow I was chatting with said, “That’s a great bag!”

Using it makes me happy. With vibrant colors, the bright cotton yarn is infused with good associations. Bri looked forward to Plant Spirit Medicine journeys to Mexico with her father, Eliot Cowan, and the PSM community. She spoke Spanish beautifully (though she’d deny it), so much so Latino folk assumed she was fluent. I miss her lilting voice, and wish Brizy were around to help me learn Spanish as our local Latino population grows by leaps and bounds.

Another interest Briana and I shared was natural, alternative healing. Both her mother and father preferred hand-on-healing, energy treatments, and herbal medicine over conventional protocols and pharmaceutical drugs. So the terminal cancers both Bri’s mother, Marty, and Briana faced challenged them to the core.

Bri’s initial diagnosis in 2005 followed by surgery, painful rehab, poisonous chemo protocols in 2006, and the hope-crushing-return of metastasized cancer in early 2008, followed by numerous CT / PET scans and radiation treatments, all gave me much to think about. I wouldn’t have taken such a passionate interest in researching viable alternative cancer healing options, if it weren’t for having shared such an intimate journey with Bri and Marc. 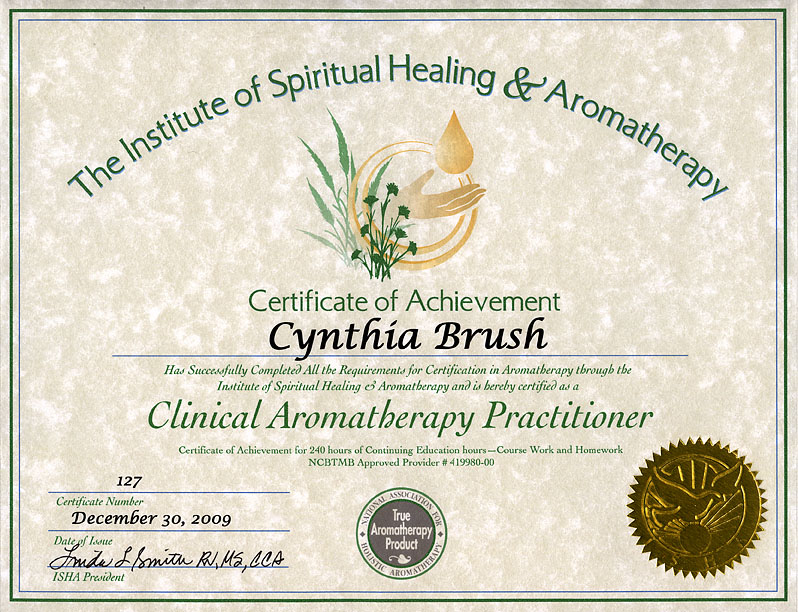 A year after Bri died, I completed my training as a certified clinical (ie. medical) aromatherapist. In the past three years, I’ve read and written about many adjunct cancer modalities, including several using the therapeutic essential oils: Orange and Frankincense. I’ve also begun to understand how our bodies are profoundly stressed eating genetically engineered (GE / GMO) foods estimated to be in 70% of the prepared foods sold in grocery stores, eating microwaved food, and by living in the 24/7 EMF (electromagnetic frequency) ‘soup:’ carrying cell phones in our purses & pockets, being bombarded by cell towers & wifi networks, holding computers on our laps, sleeping under electric blankets with electric clocks near our heads, smart utility meters being installed on our homes, etc.

This summer, some breakthrough discoveries being studied in Egypt, Oman, and the USA using pure, therapeutic-quality Sacred Frankincense EO to treat cancer patients came to my attention. Several patients in clinical trials have had cancers put into remission in a remarkably short period of several months. Dr. Suhail, an immunologist, speaks of these discoveries in this video. I feel fortunately to have made connections via Facebook with a Chinese scientist doing research at the University of Ohio on these protocols. I’ve shared some of this information with readers emailing from my www.EssentialOilsForHealing/weblog. Still need to post additional articles. It’s all very encouraging and hopeful.

As Bri neared her death transition, the most precious gift of all were the comments she shared about her insights and experiences….conversations with beings who were awaiting her or who were surprised that she was there so soon. Briana preferred not to use pain medications. We managed her pain with hands on Jin Shin Jyutsu acupressure treatments that my husband Bill gave her. So these were lucid experiences, not drug induced ‘hallucinations.’ What a generous, courageous, remarkable being she was. Her spirit’s on to other adventures now, I know. Bri was not one to hesitate. Wish I had an overarching perspective to not mourn. I do still….but gratitude for knowing her follows right behind.

A special song Bri and Marc loved was Israel ‘IZ’ Kamakawiwo’ole’s version of ‘Somewhere Over The Rainbow.’ At all three weddings we attended this year that song was played…tears welling up as I listened. It also ‘happens’ to play on the radio or at someone’s home seemingly by coincidence on favorite holidays Bri loved or at unique moments that only we, who knew her, would understand the significance of. I like to think Bri’s checking in with us, spreading her sweet love, reminding us that our connection is not severed, simply changed.

I'm Marc's Mom. Bri's mother-in-law. Bri, my only daughter, was a special one. Can't fill her shoes, but can carry on. I like to bake. Creating eggless recipes & adaptations for cookies, buttermilk biscuits, sweet cornbread, quick breads and yeasted breads, hand kneaded the old-fashioned way. Also, make gourmet ice creams with organic ingredients and specialty flavorings. Love to grow fruits & vegetables when I have space in a sunny spot.
All Posts »
PrevPreviousConfused? Yes or No? Prop 37 GMO Food Labeling ~ CA Voters Will Decide on NOV 6th
NextGolden Potato & Bok Choy SoupNext

6 thoughts on “Briana’s Legacy: A Bounty of Gifts”